Jet Blue Brings Free and Fast Wi-Fi to their Planes 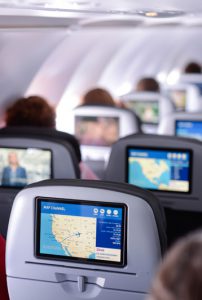 It’s wonderful to be reporting such good news for flyers. At least for those who choose to fly JetBlue.  Today the airline announced that their passengers will be able to use FREE WI-FI while waiting at the gate, taking off and up in the air for the duration of their flights.  Free?  Really?

Other airlines such as the United flight I took last week down to Antigua and Barbuda offer wi-fi you have to pay for, and TV that almost nobody pays to watch so each passenger has to watch an endless parade of commercials playing on every unwatched screen on the plane.  On JetBlue, you can actually watch all of those channels, and now, you can surf the web and even stream movies!

Here is part of what the airline recently announced.

“JetBlue’s Fly-Fi®, which clocks in at broadband speeds beating sluggish and pricey Wi-Fi offerings onboard other carriers, keeps customers connected with an Internet experience similar to what they have at home, including the ability to stream video and use multiple devices at once. The service enables JetBlue to deliver Amazon Video streaming entertainment to customers onboard to their personal devices, as well as web surfing and chatting on favorite messaging apps.

With access to fresh and free content in and out of Fly-Fi coverage areas, JetBlue’s entertainment portal “The Hub” offers customers the ability to read, watch, buy and learn while onboard. The newest content partner in The Hub is Vox’s premiere technology and culture platform, The Verge, which reaches people curious about the future.

Customers can also use Fly-Fi’s high-speed connection for true Internet streaming of Amazon Video on their personal devices or shop on Amazon.com to earn three TrueBlue points for every dollar spent on every purchase.