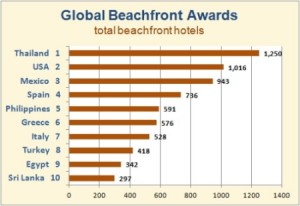 Thailand, a rising superstar in global tourism, has beaten the world’s most famous, traditional beach destinations including Spain, Mexico, USA, Greece and Turkey to take the number one position in the newly announced Global Beachfront Awards. Thailand won top spot with over 1,250 true beachfront hotels and resorts, followed by the USA with 1,016, Mexico with 943, Spain with 736 and Greece with 576.

This win follows Thailand’s meteoric, 88% rise in tourist numbers over the past five years, overriding both the global depression and its own well-publicized, internal political upheavals. Street violence and grenade attacks in Bangkok did little to slow the country’s burgeoning tourism business, which consistently outperformed all other global players by wide margins over the last five years. Figures from the United Nations World Tourism Organization (WTO) show that in 2013, for the first time, Thailand rose to join the world’s Top 10 most visited countries.

This world-winning performance was powered by millions of international visitors flocking not to its golden temples but mainly to its beautiful tropical beaches. Last year 12 of Thailand’s 27 million international tourists visited the island of Phuket alone – and it has 12 more widely scattered beach destinations with over 30 beachfront resorts each.