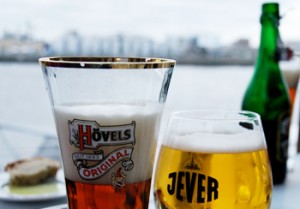 In Hamburg, one of Europe’s largest inner-city development projects has become the highlight of Hamburg’s tourism and a hot spot for high-end retailers, restaurants, and cultural venues.

HafenCity (Harbor City) take up the 392 acres of former industrial dockland between the Elbe River and the Red Brick Warehouse District. The modern design and water front pathways make the city an extremely trendy place to live, work, and experience nightlife. It has earned Hamburg the honor of “European Green Capitol” due to its sustainable urban planning with waterfront bike and walking paths.

Because of its popularity, places to eat, shop, and sleep have rushed into HafenCity.

The 25hours Hotel HafenCity opened last summer and has gained notoriety winning the Travel+Leisure Design Award 2012. With is cool nautical theme, the hotel is located right near the docks and includes individually designed quest rooms, a restaurant, car rentals, and discounts for guests under 25 years old.

Shopping is a huge tourism aspect in HafenCity with fashion labels and stores like Dannemann-Pure, Stilhaus Blocker, and Der.Die.Sein Markt setting up shops in the uber-hip town. Along with open-air markets, groceries, and bakers, food shopping can be just as fun in the new city.

Soon to come in early summer 2012, is the anticipated restaurant SansiBar Wine Bar. . Inspired by the legendary SansiBar on the island of Sylt, the featured cuisine is Asian influenced and includes a lot of seafood.

To find more information on HafenCity go to www.hafencity.com