The Yosemite Mountain Sugar Pine Railroad winds through the Sierra National Forest, preparing for the opening of the 2012 season.

The attraction is located minutes away from Yosemite’s southern entrance and takes visitors on a historic voyage through time as almost two century old steam engines, rail cars, gold panning and a museum await their arrival.

The Jenny Railcars were known in the late 1800’s and early 1900’s as “speeders” and were used to transport laborers and materials to work sites. These cars were built around a Ford Model A and make for an exciting way to ride the rails. 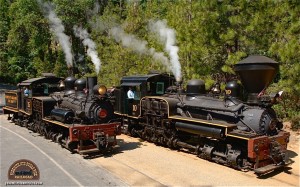 Additionally, guests can try out gold panning. Visitors can get a lesson from an expert and will be sure to find a few gold flakes.

The Thornberry Museum displays what daily life was like for loggers, also including the tools they used.

The railroad will resume their well known Moonlight Specials: a moonlit ride through the hills which includes a barbecued steak or chicken dinner and an opportunity to stop and picnic while enjoying live music by the band Sugar Pine.

On August 17, 2012, Carmel Helene will perform at the Yosemite Mountain Sugar Pine Railroad.

To learn more about the railroad, book tickets or see a full schedule, visit www.YosemiteSteamTrains.com or www.Facebook.com/ymsprr. All events and runs are scheduled weather permitting.

For lodging and other attractions, visit www.YosemiteThisYear.com