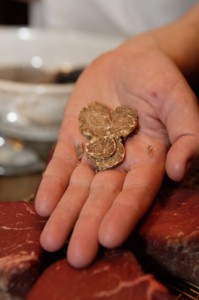 Oregon’s Truffle Festival is approaching. Between January 27 and 29, 2012, truffle enthusiasts, chefs and foragers will gather to celebrate this smelly delicacy priced at nearly $1,000 per pound.

The Oregon Truffle Festival is timed to coincide with the ripeness peak of Oregon truffles. During the festival, visitors can attend seminars, truffle dog training, a growers’ forum, which is an annual gathering for growers, purveyors, researchers and journalists interested in keeping up with the latest in truffle science and farming methods, participate in a truffle recipe contest and, of course, eat truffles.

Dr. Malajczuk’s lecture will culminate a day of presentations from truffle researchers as part of the growers’ forum.

“These results are a game changer,” said Dr. Charles Lefevre, mycologist and co-founder of the Oregon Truffle Festival. “We’ve seen a number of small-scale successes around the planet over the past decade, but now that returns from one season in a single orchard can be measured in the millions of dollars, and the number of successful orchards is entering the thousands, the level of interest is becoming intense.”